TORONTO, July 21, 2015 /CNW/ – Affordability continued to be a key driver in the search for detached homes, despite double-digit increases in average price in the 416 area code and York Region in the first six months of 2015, according to RE/MAX Hallmark Realty Ltd., one of the Greater Toronto Area’s (GTA) largest real estate franchises.

RE/MAX Hallmark examined sales and price appreciation in 35 neighbourhoods in the Toronto Real Estate Board’s (TREB) 416 area code and nine communities in York Region and found that the average price of detached homes escalated 10 per cent or more in 63 per cent (22) of 416 neighbourhoods and 67 per cent (six) of York Region districts year-to-date 2015, compared to the same period one year ago.
“Scarcity of product, coupled with low interest rates, served to drive prices of detached homes to new heights during the first half of the year,” says Ken McLachlan, Broker-Owner, RE/MAX Hallmark Realty Ltd. “Virtually all single-detached homes in TREB’s central core have surpassed the million dollar mark, with the average ranging from just over a million dollars in Armour Heights, Bathurst Manor (C06) to close to $3 million in York Mills, Bridle Path, Hogg’s Hollow (C12). Yet, purchasers continue to march forward, adjusting expectations to ever-changing financial realities, broadening their search to include areas bordering hot pockets and beyond.”

Sales figures surged in a number of communities in the 416 and York Region as the trend gained traction in 2015. Thirteen out of 35 neighbourhoods in the 416 experienced a substantial increase in detached home sales, including Armour Heights and the Bathurst Manor (C06) where the number of homes sold was up 53.8 per cent (123 vs. 80). For those purchasers intent on remaining within the city’s central core, detached properties north of the 401 offered the “best bang for their buck” with average price sitting at a year-to-date average of $1,010,711 – the lowest in the central core. Sales of detached homes in High Park, Swansea, Roncesvalles and South Parkdale (W01) jumped 37.5 per cent (72 to 99) in 2015, with heated demand pushing the average price of a detached home over the$1.2 million threshold. York Region also experienced a significant uptick, with detached sales in Aurora, King, Newmarket, and Whitchurch-Stouffville up over 25 per cent compared to one year earlier.

Some of the city’s most coveted –and affordable – neighbourhoods for detached housing saw a decline in sales as listings dried up during the first and second quarters of 2015. Perhaps the best example was noted in the East End, where sales in Riverdale,Leslieville, Danforth (E01), Birchcliffe, Cliffside (E06), Milliken, Agincourt North, Agincourt South (E07), and Rouge, Malvern (E11) declined 9.3, 12.1, 6.4 and 14.3 per cent respectively. Not surprisingly, these areas had an average price of under $1 million, ranging from $621,912 in Rouge, Malvern to $960,837 in Riverdale, Leslieville, Danforth. Competition has been intense in recent months, no more so than in Riverdale, Leslieville and the Danforth where days on market fell to 10 in June and the sales-to-list price ratio hit 110 per cent.
The July 15th Bank of Canada move to cut interest rates a quarter of a percentage point to .5 per cent is expected to further accelerate home buying activity.

“A five-year fixed term now hovers at 2.69 per cent at a chartered bank, even less at a credit union or trust company,” says McLachlan. “There’s no telling where mortgage rates will drop to in the weeks and months ahead. The stimulation will create even greater urgency in an already heated housing market.”
The most serious price appreciation in the 416 during the first half of the year occurred in neighbourhoods priced under $1 million. Birchcliffe, Cliffside (E06) led the city with a 25.4 per cent increase in values, bringing the average to $724,187 year-to-date June, up from $577,567 one year ago. The Scarborough community — nestled between the popular Beach area and the Scarborough Bluffs — has experienced a serious upswing in demand due to affordability and close proximity to Toronto’s downtown core. Cliffcrest,Scarborough Village, Guildwood (E08) posted a gain of 23.9 per cent — with average price hovering at $754,437 — an increase of close to $150,000 over the June 2014 year-to-date average of $609,047. The Rouge, Malvern area (E11) experienced a 19.2 per cent increase in price, rising to $621,912 from $521,643 one year earlier. 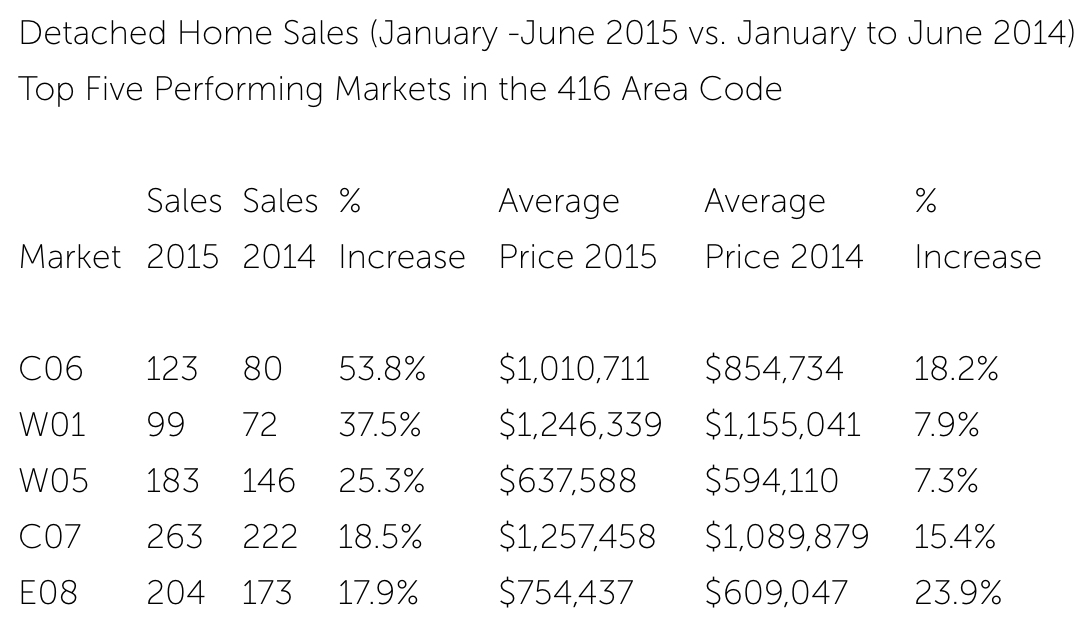